„In my work, “Beton” I am playing with the name Beethoven and its letters. Each letter of his name has its musical material, B = B, ee = repetition, t = staccato, etc. Since the repeated notes often are 4 in a row they of course connect to the 5th symphony. The form is close to a sonata form with its three main sections; exposition, development and recapitulation.” 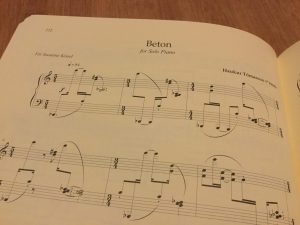 Haukur Tómasson studied composition in Reykjavík, Cologne, Amsterdam and at the University of California, San Diego. Besides a large body of chamber music, Tómasson´s work includes nine orchestral pieces, five concertos and the opera Gudruns 4th Song. His works, which combine thorough craftsmanship with a strong musical personality, are notable for their bright, colourful timbres, vibrant textures, and energetic rhythmic structure. Tómasson has received numerous awards, the most prestigious being the Nordic Council Music Price which he received in 2004 for Gudrun´s 4th Song. His music is recorded on BIS, ITM and 12Tonar labels.  Website Haukur Tómasson